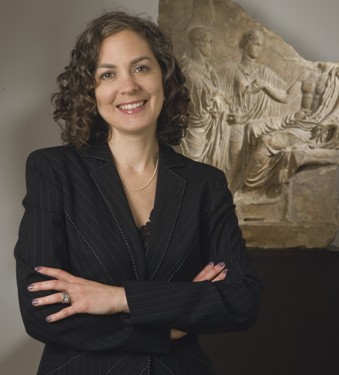 I’m the Vice President, Specialist Head of Department of Antiquities at Christie’s (Antiquities includes Greek, Roman, Egyptian and Near Eastern ancient art from pre-history through 1000 A.D.)

I was a Latin geek turned Classics major at Brown University.  I spent a semester in Rome in the fall of junior year at a Classics program at the Intercollegiate Center for Classical Studies (the Centro), at which time I was immersed in the physical beauty of the ancient world, with a particular interest in iconography.  I came back to Brown and immediately declared a double major with Art History.  My senior thesis at Brown brought my passions together – I examined the passage in Virgil’s Aeneid about the death of the priest Laocoon, analyzing the Latin and then analyzing the iconography of the scene as depicted in the Vatican Virgil, a 4th century manuscript now in the Vatican Libraries.  From Brown I went to the Courtauld Institute of Art in London where I received a Master’s Degree in Greek and Roman art in a course entitled “Ancient Art and the Viewer”.  In the course we studied the material culture of the Classical world in the context of the impact the works had on their original intended subjects (propaganda, religious beliefs, etc).  I wrote my thesis on images of the Sacrifice of Isaac in the Early Christian catacombs of Rome.  Within six months of finishing my MA in London, I landed the position of Administrator in the then two-person Antiquities department at Christie’s in New York.  I have now been at Christie’s for over 14 years, climbing the ranks from Administrator to Specialist to now Head of the Department, with a department of four people.  I have also been an auctioneer (one of only 15 in New York) since 2004.  Some highlights from the podium include the Christie’s record for an antiquity at auction with $16,800,000 achieved for A Cycladic marble reclining female figure, attributed to the Schuster Master, Early Cycladic II, circa 2400 B.C. in our December 2010 Antiquities sale.

A Piece of Personal Trivia:

I am a huge Yankee fan.  I spend my free time, if not with my girls, then playing tennis (mostly with my husband), knitting (my mom owns a knitting store in NYC), and watching the Yankees.  I am very committed to my family, most of whom live very nearby, and also to my friends – we try to be as social as humanly possible – which is only possible with very good childcare at home!

Only pursue the dreams that are borne from your passions.  To me, it would be impossible to leave my family every day and commute into the City if I did not absolutely love and believe in what I do for a living.

Get to know Molly Morse Limmer and connect with other Executive Moms members on our Network – it’s easy.

Want to be featured in a futureMember Spotlight?  Email us at emoms@executivemoms.com

Marisa Thalberg  @ExecutiveMoms
Today is the 7th anniversary of losing my indomitable mom. One of my favorite of so many memories is how she worked… https://t.co/coHqZDkrku
6h reply retweet favorite 6 hours ago