Fearlessness, for the Rest of Us

Two years ago this weekend my friend Jennifer Goodman Linn finally succumbed to the sarcoma that robbed her of so much… and yet also became the basis for her vast and enduring legacy as the founder with her husband David Linn, of Cycle for Survival, which in true Jen style, became the fastest-growing athletic fundraiser in the country.   Jen had also built a personal platform around the idea of being fearless.  In her honor, I wanted to repost a guest blog I wrote for her site (after her passing).  You can read it below, or read the original here: 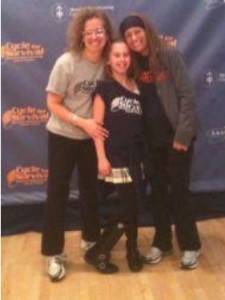 From the moment my friend Jen Goodman Linn began to build a platform around the idea of being fearless, I thought: “fearless, yes! You are fearless Jen!” (Of that there was no doubt). And what a great rallying cry for the rest of us.

Yet the more I found myself reflecting on that word as both a lens to others and a mirror to myself, the more complex the question of “fearlessness” became in my mind. Are we all equally inclined toward living fearlessly?

Is it like an innate muscle we all possess (that perhaps can be strengthened, through exercise? I believe Jen would spark to that analogy).

Or is it more of a state of mind that we simply need to choose to don like a hat?

Is ‘fear’ the same thing as ‘worry’? (I, of course, now added to my worries that I wasn’t fearless enough).

I think the people we tend to admire most in life are those who seem to possess an excess of the qualities we wished we saw more of in ourselves. I know I have many friends and colleagues who perceive me as (at least a variation of) fearless (confident, strong…) yet “fearless” was never high on the roster of words that comprised my own self-definition. Meantime, I deeply admired Jen for her unwavering bravery, determination, and yes, fearlessness in the face of tremendous adversity. I look now in awe at another amazing friend who just became a widow, for what seems almost unreasonable strength, dignity and grace that she is demonstrating to all of us and particularly to her daughters.

And perhaps most of all, I look to my mom, who has been thrown one sucker punch after another, year after year, including just learning that after enduring surgery, radiation and chemotherapy for both uterine cancer AND non-Hodgkins Lymphoma for many months, some renegade uterine cancer cells escaped and have quickly formed into a new tumor in her abdomen. Since we found out that this protruding “egg” (as she has so tactfully labeled it) near her belly button does not in fact have an innocuous explanation (that could be easily scrambled or fried), I have been, quite frankly, consumed with fear. I want to be strong for her, and for myself. I want to reassure her, yet I reflexively look to her to reassure me. (Ed. note: since I first wrote this, the cancer has further spread and my mom is fighting as hard as she can)…

For really, how are we supposed to be absent of fear, when we are faced with the “mother” of all fears: losing someone we love?

After wrestling with these questions, I can only think that perhaps for many of us “living fearlessly” does not mean aspiring to NO fear… But rather, to paraphrase one of my favorite quotes, it is remembering that the definition of courage is not the absence of fear – but rather having fear… and still going forward. Like moths to a flame, we can bask in and derive energy from those bright lights like Jen and my mom who simply radiate fearlessness and positivity by their very nature. Yet for the rest of us who are less able to just throw our fears away, perhaps the equally important measure of our mettle is that we find a way to put our fears in a sack, a sack we may wear as we go through the world but that we manage to adjust and readjust so that it doesn’t pull so impossibly hard on our shoulders that we cannot carry them. FORWARD. We feel them – but they do not stop us. Because there is no alternative, and because maybe we are stronger than our inner voices sometimes whisper. If to be ‘unwavering’ is an ideal, it’s worth reminding ourselves that to waver is not a sign of weakness – it is human. When we stand back up after our knees have buckled, when we persevere (not to mention go on to accomplish in life, in ways large and small), it seems fair to say that we have done battle with fear, and won.

Marisa Thalberg  @ExecutiveMoms
@bryanbehar Boy do we EVER. 💔
May 31 reply retweet favorite 5 days ago

Marisa Thalberg  @ExecutiveMoms
Sharing this heartfelt message from our CEO @MarvinREllison. I am so proud to work for this man. And as I have said… https://t.co/gLlSaeZR6i
May 31 reply retweet favorite 5 days ago