Posted on July 19, 2013, in Executive Mom Plans a Bat Mitzvah, Uncategorized, with 0 Comments

I noted it was a gamble to engage my corporate conference producer to help with Hannah’s Bat Mitzvah.  Several few meetings back, it appeared I had in fact rolled the dice poorly in this regard.

One evening we had a meeting at our apartment  to discuss the overall concept/approach to the party – knowing that we didn’t want a “theme,” but DID want something that connected our emerging vision: warm, meaningful, connected to Thanksgiving weekend, the view of Ellis Island, somewhat vintage – and all in a way that felt right for Hannah, and unique to us.   Seth brought his trusty #2 Katie, as well as a young woman fresh out of school, well-intentioned but inexperienced.  Seth has an amazing announcer voice and is a consummate salesman.  In combination, his build-up to what were about to see was considerable.  “We are excited to present to you… The Path to Wow!”

David and I exchanged one of those looks that speak volumes between couples, let’s call it a mix of “really!” and “really??”   Unfortunately, the “presentation” was then turned over entirely to the recent college grad, who proceeded to reveal … pictures of floral arrangements, straight from standard florists.

THIS was the “path to wow?”  Had this been a business meeting in my executive life, I would have known exactly how to respond, but between wanting to keep things positive and most of all being aware of Hannah’s horror over any form of confrontation, I tried as delicately as possible to convey… “REALLY??”

Meantime, David realized we had not heard a peep from Avery.  He found her working with intense focus in the next room, and when we came out, he was shaking his head with a big grin.  “Avery, come in here, will you?  And show everyone what you’ve been doing?”  I looked at David quizzically as he just smiled back.  Avery walked in holding a big piece of paper covered in different post-its (she is surely ready for corporate brainstorming sessions).  Half proud, half sheepish, she offered that she had overheard the team discussing a “Path to Wow”… and decided to present us with her own. 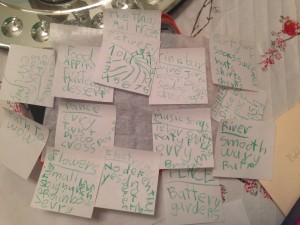 As she narrated us through what she had written in her 1st grade spelling, she had covered the venue, the flowers, the food, the photo montage, the music, the drink selection, the favors… we realized she had even art directed the river outside the venue we had finally chosen, considering whether it should be “smooth, wavy, or ruff” (thereby signaling a strong future in the beauty/fashion business – heaven help her).

We were floored.  Maybe the “path to wow” wasn’t such an overpromise after all … except the vision was coming from our then-6 year old!

Marisa Thalberg  @ExecutiveMoms
I have been a part of #cycleforsurvival from the beginning... and with a big match happening this is the perfect ti… https://t.co/GtPpnuoOJN
Feb 20 reply retweet favorite 5 days ago