As someone who has always fed on popular culture it’s perhaps not surprising that I wound up with a career in marketing; I’m my own best consumer of the images we media create, even/especially as I should have a critic’s eye. One convention of TV to which I always aspired, and against which I judged myself: that group of women friends on so many TV shows who are always hanging out together.  In my 20s I loved watching “Friends” (and In fact often with a couple of friends) yet even so — the way Monica, Phebe and Rachel always managed to congregate on that couch in Central Perk seemed like an impossible ideal to me.  Same with those “Sex and the City” gals.  Yes, I’m quite cognizant of the fact that this is largely a celluloid convention (people on TV don’t call or text, they “drop by”), but those images deeply affected me, touching an inner Executive Mom nerve that is usually kept well-insulated by the muscles of work and family: what about time for having my own friends… and being one?  Was I missing out in the coffee klatsch department?

I know this concern is not quite mine alone.  From a survey we did several years back, while an overwhelming majority of the women in Executive Moms gave their lives high marks for being, if anything, “overfulfilled,” the #1 thing we cited as a compromised area was time for friends.  This becomes even more prevalent for women in significant executive roles.

I still periodically worry about this.  The calculus of responsibilities in a day or week just never seems to favor an additional factor of hours for something so entirely… for ME.  I consider my closest friends who live outside of the city and rue how infrequently I see them (with a passing jealous thought of all the time surely THEY must be spending with newer, more available friends). 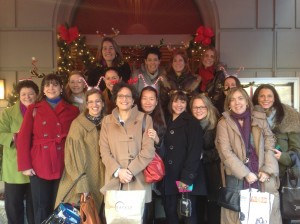 The Extended Group – at our holiday breakfast

But then THIS happened: I found myself having a coffee klatsch of my very own.  It formed (and re-formed) out of a group of fellow moms from my older daughter’s elementary school days.  The majority, amazingly, happen to be women who are different varieties of Executive Mom, ranging from professional dancer to lawyer to banker to small business owner.  They are interesting, funny, accomplished women.  And thanks to the alpha organizing proclivities of one (that’s you, Jill), the actual coffee katsching happens now with a fairly predictable cadence of Fridays, before work (during the school year).

The reality is, I can’t go most of the time (given how much work increasingly happens now “before work,” not to mention my desire to take my little one to school at any given opportunity).  But when I AM able to “drop by,” those 30 or so minutes are nourishing in a way that surprises and delights me every time with their efficient power – a breakfast protein bar of connection, commiseration, advice and energy.  I head off to work feeling slightly decadent… and fueled differently than other mornings.

If the paradox of being an Executive Mom is that you can feel both so overfulfilled, and simultaneously spread too thin, I suspect I will always feel like I’m underperforming in the “time with my own friends” category.  But for now, I hope those friends who’ve given me my own Central Perk moment, know just how much of a perk I appreciate it to be.