Posted on June 5, 2013, in Executive Mom Plans a Bat Mitzvah, with 0 Comments 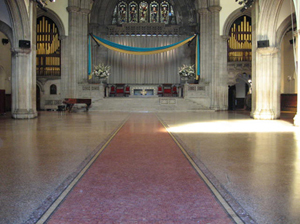 Off the little list of venue possibilities I had generated, I held high hopes for one in particular, a venue right in our Upper West Side neighborhood of which I had never been aware until not one, but both our kids’ public schools held their auctions there this year – and both were lovely.  It’s called Landmark on the Park, right on Central Park, with dramatic vaulted ceilings and an almost gothic flair.  Because – and here’s the catch – it was an historic church.  Nonetheless, Hannah and I, along with my husband David, set out to meet Seth and Katie there.

Here’s what we learned: if you are planning an event for the daytime, visit during the daytime.  Had we not, we might not have realized that the dramatic theatrical lighting that was instrumental in creating so much ambiance at the auctions we attended at night was replaced by bright streaming sunshine… Illuminating the (understandably yet previously unnoticed) very Christian stained glass windows.  Moreover, we realized the space itself just wasn’t as expansive as we had recalled, to host both our service (more on that to come) as well as a subsequent party.

Unfortunately we will have to continue to know this Landmark only as we mingle with our fellow school parents there in future years.

Marisa Thalberg  @ExecutiveMoms
I have been a part of #cycleforsurvival from the beginning... and with a big match happening this is the perfect ti… https://t.co/GtPpnuoOJN
Feb 20 reply retweet favorite 4 days ago