If you’ve read Tina Fey‘s recent and now bestselling book Bossypants (which we just did – at frightening hours on a dimmed iPad – but that’s another story), you will know that she abhors the idea of being held up as any kind of magazine-appointed ‘mother of the year.’ However, her razor-sharp, irreverent perspective is enough to get our votes.  Bossypants (Reagan Arthur Books, 2011) is mostly an entertaining memoir, but we had to share a few of our favorite quotes that speak directly to motherhood , working and otherwise…

Wisdom from a Bossypants 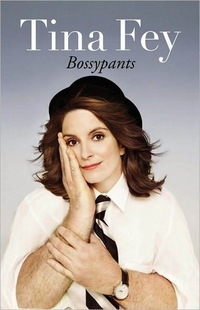 What is the rudest question you can ask a woman?  “How old are you?”  “What do you weigh?” … No, the worst question is “How do you juggle it all?”

“I can tell twenty comedy writers what to do; I can argue with a cabdriver about 10th Avenue versus the West Side Highway… but I could not talk to the babysitter about fingernail clipping.  I’ll bet you Margaret Thatcher would say the same thing.”

And our favorite piece of irreverence (with apologies to the mothers of sons, or anyone who finds this kind of humor not in their taste):

The Mother’s Prayer for Its Daughter

First Lord: No tattoos.  May neither Chinese symbol for truth nor Winnie-the-Pooh holding the FSU logo stain her tender haunches.

May she be Beautiful but not Damaged, for it’s the Damage that draws the creepy soccer coach’s eye, not the Beauty.

Guide her, protect her when crossing the street, stepping onto boats, swimming in the ocean, swimming in pools, walking near pools, standing on the subway platform, crossing 86th Street, stepping off of boats, using mall restrooms, getting on and off escalators, driving on country roads while arguing, leaning on large windows, walking in parking lots, riding Ferris wheels, roller-coasters, log flumes, or anything called “Hell Drop,” “Tower of Torture,” or “The Death Spiral Rock ‘N Zero G Roll featuring Aerosmith,” and standing on any kind of balcony ever, anywhere, at any age.

Lead her away from Acting but not all the way to Finance.  Something where she can make her own hours but still feel intellectually fulfilled and get outside sometimes, And not have to wear high heels.  What would that be, Lord?  Architecture?  Midwifery?  Golf course design?  I’m asking You, because if I knew, I’d be doing it, Youdammit.

May she play the Drums to the fiery rhythm of her Own Heart with the sinewy strength of her Own Arms, so she need Not Lie With Drummers.

Let her draw horses and be interested in Barbies for much too long, For Childhood is short — a Tiger Flower blooming Magenta for one day — And Adulthood is long and Dry-Humping in Cars will wait.  O lord, break the Internet forever, that she may be spared the misspelled invective of her peers And the online marketing campaign for Rape Hostel V: Girls Just Wanna Get Stabbed…

And should she choose to be a Mother one day, be my eyes, Lord, That I may see her, lying on a blanket on the floor at 4:50 am, all-at-once exhausted, bored, and in love with the little creature whose poop is leaking up its back.  “My mother did this for me once,” she will realize as she cleans feces off her baby’s neck.  “My mother did this for me.”  And the delayed gratitude will wash over her as it does each generation and she will make a Mental Note to call me.  And she will forget.

But I’ll know, because I peeped it with You God eyes.

Marisa Thalberg  @ExecutiveMoms
Today is the 7th anniversary of losing my indomitable mom. One of my favorite of so many memories is how she worked… https://t.co/coHqZDkrku
7h reply retweet favorite 7 hours ago